The municipality of Klos is located in Northern Albania. It spreads from the valley of the River Mat to the surrounding two thousand meter high mountains to the West and East. The city itself sits at the banks of the Mat at 280 m altitude and is home to half of the municipalities 16.000 inhabitants. The region is predominately agricultural in character, with some limited chrome mining. The neighboring towns are Burrel and Buqlize.

First mentioned in the 15th century, Klos used to be the marketplace of the Mat region and part of the historic caravan route called "Road of the Albanians" or "Rruga e Arberit". Before road construction started in the 1930s, this footpath formed the main connection between the Adriatic Sea, capital city Tirana and Eastern Albania's Dibra region. Four historic bridges remain, of which the Vasha Bridge is the best known.

Beyond this historic route, Klos is known for the "kulla" tower houses, private dwellings with defensive character, as well as natural beauty of surrounding mountains and canyons. Mount Balgjajt with it's three main peaks, glacial cirques and 15 lakes is the most popular of them. Especially noteworthy is the Mali me Gropa-Bizë-Martanesh Protected Landscape, a hypercarstic, otherworldly place.

The village "Guri i Bardhe" has been named one of Albania's "100 Fshatrat", the most characteristic and attractive settlements of the country.

Highest point of the road at Qafa Murizes on 1.250 meters

Got a question? We've got answers. If you have some other questions, contact us using email.

Can I use my custom domain?

Absolutely! You can connect your custom domain on the platform in all paid plans. 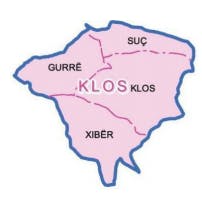